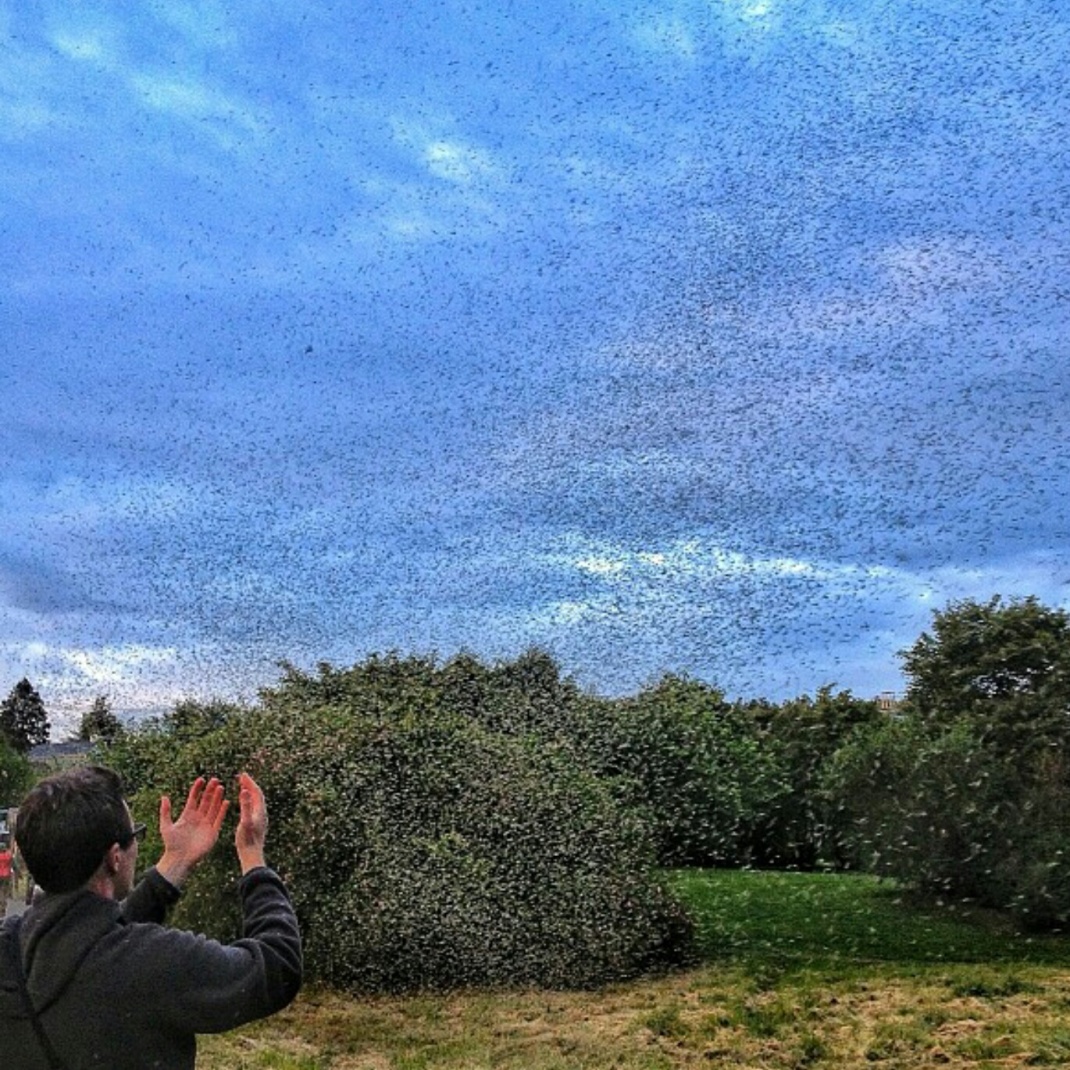 My bag dropped to the ground like a lead weight, as I slumped to the ground, exhausted. We’d just down-climbed 1000 feet to escape a storm, leaving behind grand vistas and a group of mercurial White-tailed Ptarmigan; both of which I desperately wanted to photograph. Instead, I was jumping around a soggy grove of twisted Western Larch, trying to pull my rain gear on over muddy boots and a sweaty, sticky t-shirt.

Looking at the angry sky, my vision blurred and focused between me and the ashen clouds. Little dots were frantically and silently, bobbing about in the space above my head. Gnats or some other member of the family Dipteridae. They seemed to be on another plane of existence, totally oblivious to the storm brewing and my head directly below them. They only had one thing on their mind: breeding.

This was a lek. A lek is a place; lekking is a sexual behavior. Broadly described, a lek is where a bunch of males get together in specific location and display for females, hoping that they’ll be picked. Watching this from the standpoint of a scientist, we believe this nexus allows females to pick the best mate (species that lek are almost always polygamous), based on the male displays, a demonstration of good genes. When you can actually see what’s happening (like when the species in question isn’t the size of a pin-head), leks are worth the effort that can go into witnessing them.

I saw my first lek in college. During mid-winter break, my friend Ryan and I drove to the middle of nowhere Washington, leaving Seattle early enough to arrive before dawn. It was March in central Washington and it was cold as shit. We stood shivering, pushed up against a barbed wire fence on a ridge-line overlooking an expanse of sagebrush. As a magenta dawn pushed through the darkness onto the snowy Cascades to the West , we heard what almost sounded like people volleying tennis balls back and forth out in the rangeland. Sage Grouse (listen, on high volume, below).

The most well known of lekking species in the West, male Greater Sage Grouse (Centrocercus urophasianus) get together in early spring to display, (I omit Greater in other mentioning, because it sounds silly to me, but I am speaking of Greater Sage Grouse specifically, not Gunnison Sage Grouse, which I have no experience with). This involves gulping up about a gallon of air to inflate esophageal sacs, which they then throw about creating a sound in deflation that is altogether difficult to describe (not to mention they also look as if they are waving around large, yellow breasts in the process). They do this every morning for a couple months, disbanding during the daytime and returning before dawn. Sage Grouse look beefy and huge on the lek, but it’s because they are all swelled up with passion and hormones, in reality a very large male only weighs about six pounds. This whole strutting spectacle is totally ridiculous to us, but it’s about as serious as it gets for a male Sage Grouse. 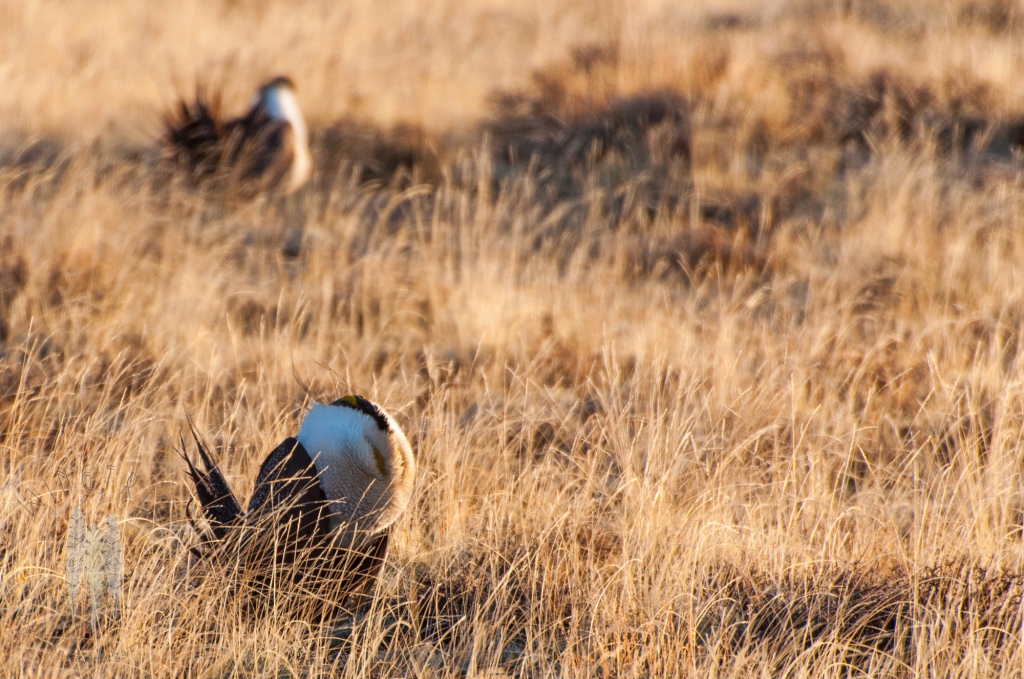 Just about to deflate.

For those reading who insist on the ever present majesty of nature, I’m sorry, you’ve no argument in this case. We go look at Sage Grouse because it’s a fascinating spectacle, not because it’s majestic. They look like they’re flashing yellow bras at each other. Or pushing egg yolks out of their chests. Either way, absurd, not majestic.

Lekking, may sound like a fairly simplistic concept. However, there’s overall disagreement about how and why leks form. Maybe they form in places where females congregate most? Maybe they form around particularly desirable males, with less fit males hoping to benefit and get a little of the action on the side? Or maybe they form because it is a low cost to females to visit many males in one spot, so they visit leks with more males, driving higher congregations of males? Quite possibly it’s all of the above, or one or the other, for the species we know to lek.

In the case of Sage Grouse, the most appealing males, Alphas, Betas, and Gammas get to mate most. This would mean female choice would exacerbate certain traits to the point that all males end up being similarly equipped. This of course doesn’t happen, because of genetic mutations and environmental factors difficult to follow. Models can only do so much, and we find there are still less desirable males out on the lek.

A Sage Grouse lek. Notice there’s few things to block sound or vision and it’s virtually flat. They choose this site specifically for those traits.

It would seem that lesser males wouldn’t benefit much from this situation, knowing that females ignore them for the hunks in the middle. You’d be right to an extent, but often they’re younger males that wouldn’t be mating anyway. They watch, they learn, and they might sneak a copulation here and there too. 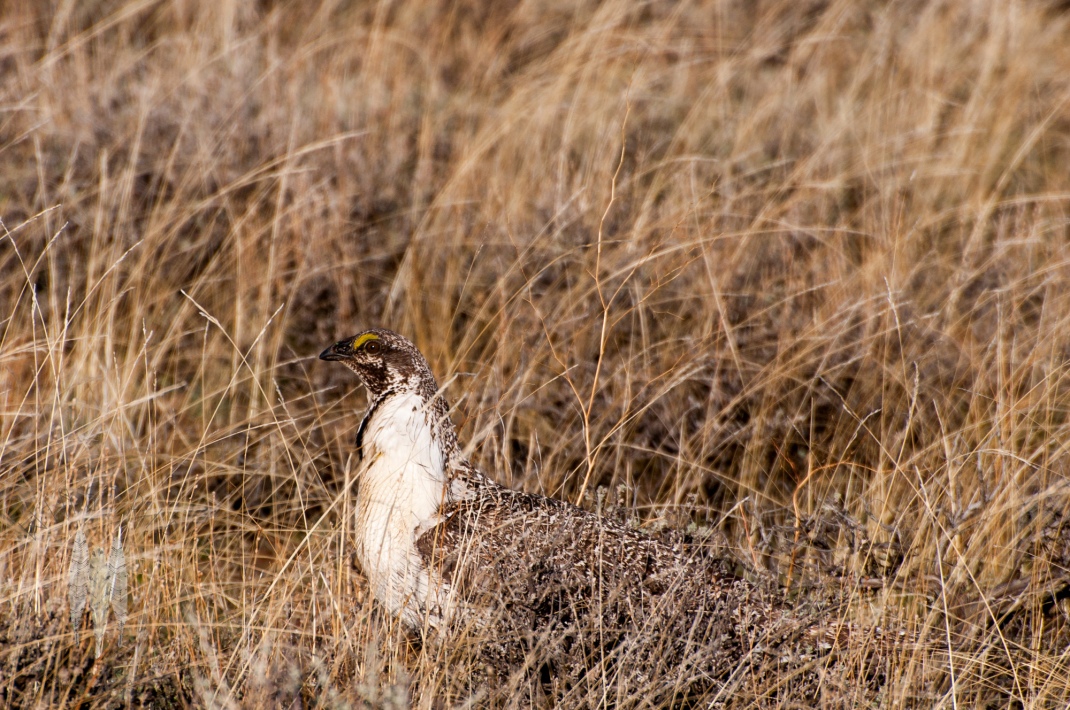 A deflated, non-displaying grouse we saw on the edge of the lek. Presumably a lowly male checking out the scene.

The second time I saw a Sage Grouse lek was much more satisfying, because we sat in a 15 passenger van and watched from a few meters away. This time I was with a group of high school students from Seattle Audubon’s Birdwatch Program on a trip to Malheur National Wildlife Refuge. Pulling up a disconcertingly muddy road in the depths of early morning, we blindly hoped we had the right spot based on our van’s trip meter. Soon we knew this was the spot, as that popping, unworldly sound drifted through the open windows. The center of the lek wasn’t too far from the road and we could see the hierarchy clearly, with dominant males taking up more area. On the edge, more squabbles happened as lower down males battled for space.

A confrontation between two males.

Back in the North Cascades, it was very obvious how costly this system of breeding could be. Making a racket or congregating in one spot means predators know exactly where you are. Sure, there’s safety in numbers, but when you are out of your mind on hormones and displaying, you are putting yourself at risk. A gaping goatsucker could have wiped out the insects above my head entirely. Ferruginous Hawks and coyotes routinely survey Sage Grouse leks, and predators often scare off all the birds for the day (not the day you want to be visiting).

In the Northern hemisphere, the vast majority of birds lekking are grouse. As you approach the equator, more and more species have the luxury of this strange breeding system. It gets elaborate, with crazy colors and even coordinated efforts between males. The Andean cock-of-the-Rock and Red-capped Mannikins are among my favorites, though I’ve never seen them display in person. Someday I hope to get to the Arctic to see Buff-breasted Sandpipers on their leks (although, they’re polygynous). If I’m lucky, I’ll head to New Zealand before Kakapo calls no longer echo around the mountains at night.

I’ve barely grazed the surface of the story of leks, because I’ve only talked about birds and one specific, nuclear form of lekking. Some males on leks display from far distances, but are close enough to be heard, like the flightless nocturnal parrot mentioned above. The Kakapo and possibly even harbor seals, display their dominance on these so called, exploded leks, within earshot but not eyesight. They are of course gathered in a specific area, not just spread out all over. That would just be simply territorial displaying, like American Robins singing on their patch with some neighboring males adjacent. Few mammals lek, some pinnipeds and ungulates, are known to lek.

Lots of theories have developed as to why this behavior evolved. I don’t think you need hear them all to appreciate how bizarre and spectacular a lek can be. Just click through to these videos and you’ll get it.

Thinking about all this, I came back from the cloud of insects to my current situation. My three friends and I were all exhausted, but trying to look relatively tough. A group of males, clustered around, looking at one another with no ladies in sight. Good thing none were going to show up and evaluate us. They’d have left for another lek without a doubt.