Winter in the Northwest was deflated this year. Spring seems to have come early, because we never really had those agonizing monotonous days of gray skies with just enough rain to keep you indoors, but not enough to feel like you should. I still managed to hibernate, but as soon as I started seeing signs of spring, it’s been hard to stay inside. Writing is hard enough to sit down and accomplish in the worst of weather; now when I look outside I see opening leaves spreading in chartreuse banners in light winds and sunlight. My ears hear birdsong all day and then frogs by night.

Birds will always be my best signals of the comings and goings of the seasons, but as I’ve delved into other species, I’ve found plants and insects to be delightful auxiliaries. The difficulty is that I know less about them, so while I can name a plant and notice an insect, I have little to go on from there. Plants are easier, they sit still and they have a broader “fan base.” Insects, and other invertebrates are a different beast.

In some way this is infuriating. Unlike many vertebrates and much of the plant kingdom, I can’t simply reach for a book. Yes, the enthusiasts of dragonflies and butterflies have lavish regional guides, which make the thought of identification for amateur possible. Most other terrestrial invertebrates do not have such popular standing. To say the least I’ve been spoiled by years of birding; field guides are typically available for every region. Building a field guide is no simple or cheap task for any group of organisms, so it makes sense that birds have some of the best; birders are a huge market.

In other ways, this makes taking a closer look all the more exciting. I know when to expect birds, what I’m hearing, and much of their life histories. Spying on the insects that peruse plants now in bloom provides the entertainment of finding an alien world vibrating right beneath your nose, all but unimagined if not ignored by my patronage of larger more obvious natural fare.

My favorite thing this spring has been examining the Big Leaf Maples (Acer macrophyllum) as they’ve pushed out first blooms and then leaves. Two months ago I anxiously waiting for the first flowers on the earliest blooming trees on the property where I live, on Shaw Island. I found myself pacing back and forth to see the first pendulous yellow blooms, peaking from their packaging inside splitting red buds.

These maples are one of the earlier blooming native plants in the Pacific Northwest, just shy of currants and salmonberries, which are the first harbingers of both Spring and the return of Rufous Hummingbirds. As they pop, the insects go wild. Bumblebees are well known as an early season insect because they have excellent insulation and large enough mass to get going when others are still eggs, waiting for a warm weather trigger or pacing about in their hibernaculums. There are lots of other early season insects ready to get their first stab at pollen and nectar. 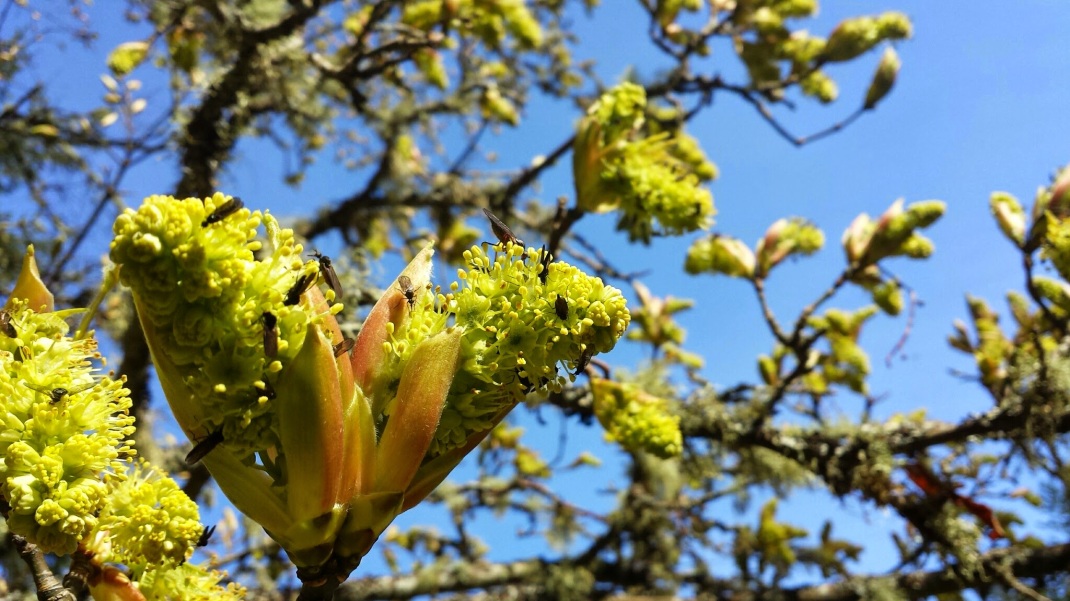 Tons of insects on a maple bloom.

On a particularly sunny and calm day in early March, while avoiding writing, I walked over to my favorite maple and was astonished by the activity. There were thousands of insects visiting the flowers and the trees literally hummed with activity. Standing there I realized I had no idea what any of them were and I didn’t really know how to start.

Not too long ago I created a DIY macro photography setup. That was a good first step to learning a few of the insects. Armed with a reversed 50mm lens, a self designed diffuser, and an orchard ladder, I headed over to try to get some images. I’ll save the technical descriptions for elsewhere, but to say the least I had a difficult, yet rewarding time taking some shots. 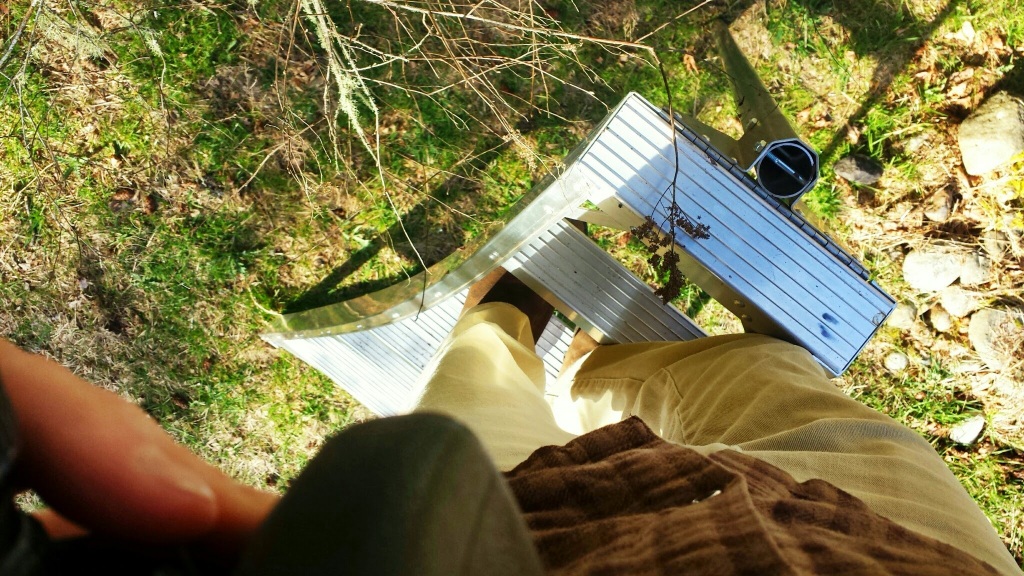 Atop a ladder, where I tried to weave in close to insects for their mugshot.

The seemingly simple task of taking macro photos of insects provides the photographer with much fodder about their subjects. Some will permit you to move close, others want nothing to do with you. Taking pictures in full sun is great, but when the buggers slow down from colder temperatures they are easier to snag in focus. Windy days aren’t great for good photos, nor for insect activity. Your shadow not only blocks light, but scares everything.

The technicalities have little to do with the excitement of seeing this new world. Camera or not, I was witness to much I can’t say I fully understood. Flies and bees were the bulk of the visitors, but the variety was astounding and it became clear this wasn’t a simple feeding grounds. Predators were roaming. Progeny were being created. Mimics fed calmly under the cloak of others’ clothing.

To a large degree all I could do was watch and look for patterns. See a fly as a fly, a bee as a bee, a beetle as a beetle, and move on from there. With mimics, even that can be confusing.

I discovered Mining Bees (family Andrenidae), little bees that nest in the ground. They’d hatched even before the mason bees that love the holey old barn-wood about the property, but are about the same size. They’re solitary, which means a female digs and builds her nest alone, making them easy to miss. Their size also means most people don’t notice them. I’d read about them before, but didn’t really know what they were till I had them in frame. 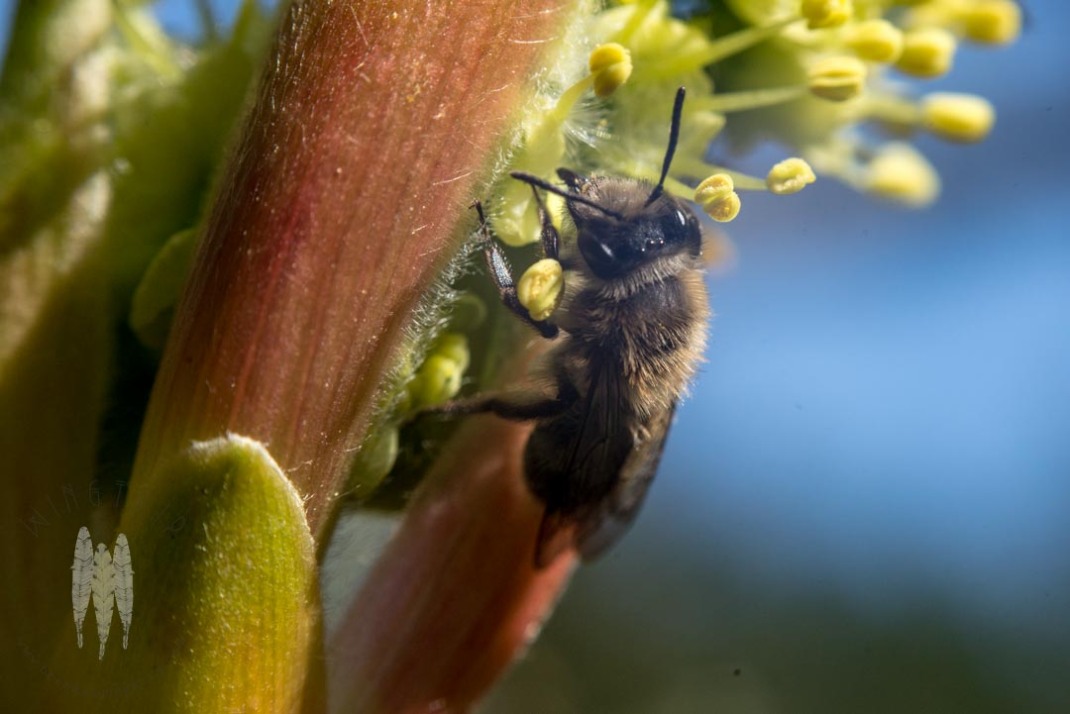 A species, yet undetermined, of mining bee.

I discovered Dance Flies (family Empididae). They were obvious, big, creepy flies bouncing about their aerial leks, males showing off for potential partners. At first I thought they were merely eating nectar, but when I took a closer look at what I assumed was mating, instead found crumpled insects grasped in long red legs. Shortly after I watched them hunting: a fly making stabs at other smaller visitors on a bloom while also feeding. And feeding: the long mouth piece probing into a squished fly like it a gruesome smoothie. It turns out that males acquire a food item with the goal of enticing a female, who then feeds on the prize while the male mates with her (partially it seems, so that the male doesn’t become the food item himself).

And another with prey.

A dance fly with a crumpled prey item.

This one seemed to be pretending to sip nectar but really wanted to go after nectar. 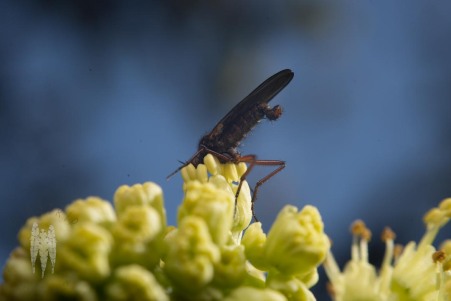 I discovered that figuring out what species I observed would be a challenge and would take a lot more research than I could do on the internet or without specialized books or expert advice. I would have to be satisfied with small steps, which I’m stumbling toward. Why? Because I can’t seem to stop trying to learn more.

A beetle, which means I can get down to Coleoptera, the order of beetles, which means essentially nothing because they are the most specious order of all insects. 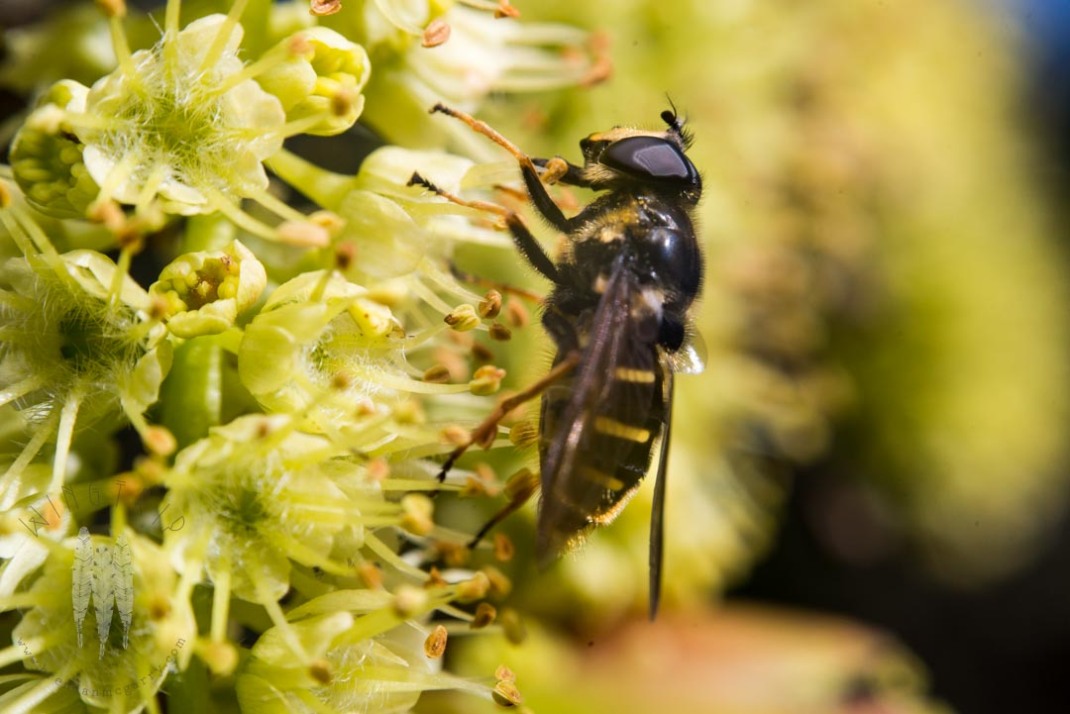 A fly mimicking a yellowjacket. Pretty cool, but again, I have clue what it is beyond a Dipterid.

The first maples that bloomed aren’t swarming with insects now. At their peak, even a night they were covered in moths. They’re still dangling blooms, but I get the impression the food is mostly gone. That’s a bummer, but I suppose I’ll just have to move on to other trees or wait till next year. I can still fall back on the birds, who are building nests, just arriving, moving through, and almost constantly singing these days. They’re a lot less work than insects or plants, but maybe I’m just lazy.