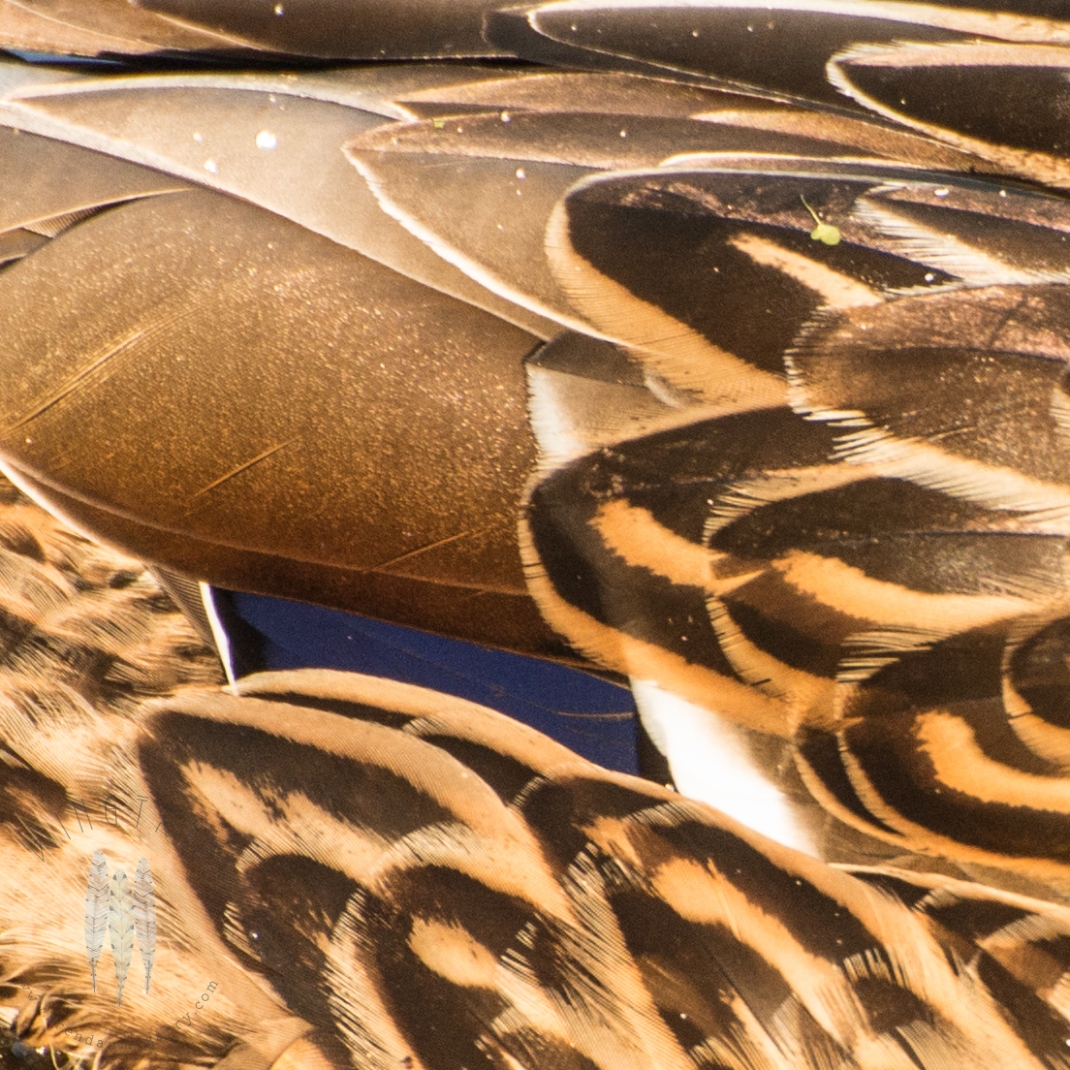 Welcome to Wingtrip’s Natural History Lexicon, a regular rundown of natural history terms, however varied and at random. To find future and past posts on this subject, simply search “natural history lexicon” or find it in the tags. Thanks for reading!

-A bright patch of plumage on the wings of certain birds, especially a strip of metallic sheen on the secondary flight feathers of many ducks.

Mallard ducks are one of the most widespread species in their genus Anas (go ahead, get the laughs out of the way). They are so common, looking for handouts in parks, literally waddling across city streets in traffic, that we sometimes forget they are every bit as stunning as the rest of their colorful relatives. Males are truly stunning, with emerald green heads, a deep chestnut front, and a decorative twirl in their tail feathers. My favorite decoration of all, is a group of feathers that spend much of their time hidden, folded away, shared by both male and females of the genus: the speculum.

Feathers are many things to a duck. Weatherproof and water-shedding contour feathers on the outside, insulating down beneath, flight feathers allowing flight and steering. What about those colors though?Vision is a dominant sense in almost all birds, (a few notable exceptions exist, like food sniffing kiwis) and ducks are no different. They want to be able to distinguish their own species through coloration, display a threat or virility, or even blend into a specific environment. 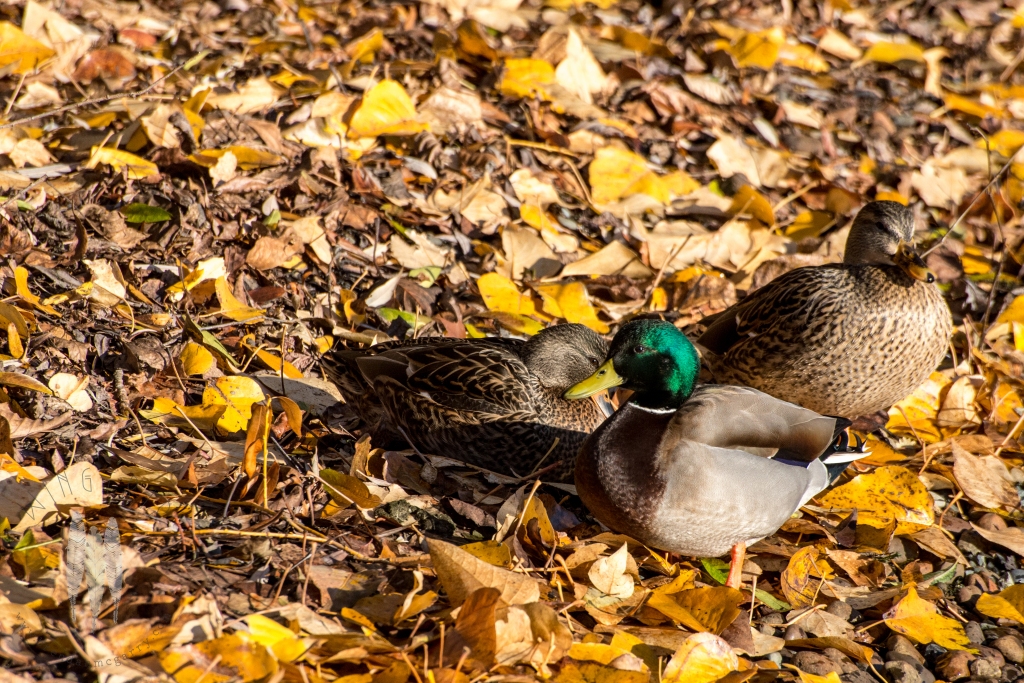 The male Mallard doesn’t blend in very well, but his female companions don’t show up nearly as well.

Speculum is simply a fancy term for a vividly colored area of the secondaries, a part of the flight feathers. In Anas ducks speculum coloration is structural, not pigmentary. What this means is that the coloration comes from structural reflection (and interference) of light, not from pigments which absorb and reflect certain wavelengths of light (I’m not giving a physics lesson here, so that’s as far as I go). If you are a Latin wiz, you’ll see speculum as rooted in the Latin specere, “to mirror,” which makes sense as speculums are flashy reflective surfaces (note that not all structural coloration is iridescent). Other birds do have speculums, the ducks are simply most well-known for them.

So why have a speculum? Obviously being flashy in coloration is important to ducks, otherwise it wouldn’t be such a prominent, genus-wide trait. Both sexes have sepeculums, which could lead us to believe that this color wasn’t generated by sexual selection. And this would be a decent assumption, as it’s broadly accepted that speculums are there for signaling between birds in the air, aiding in important flocking behavior.

Birders and ornithologists know we don’t usually see Anas ducks on their own. Just think about it yourself, how often do you see a lone Mallard? Infrequently, as they are usually paired up, raising ducklings, or in flocks. These gregarious birds need to keep track of each other for a variety of reasons. Safety in numbers (and in homogeneity of flocks) during movements being paramount, the speculum is likely the ticket (along with vocalizations of course). In air it’s out there, flashing reflections all over the place for all to see. On the ground it’s tucked away, allowing mothers to stay hidden on nests and studly males to not be too conspicuous.

I’ve always loved ducks, because as a young birder, they were the easiest birds to get a grasp on. They were everywhere, were less hyperactive than say a kinglet, and were common on many a pond in the Seattle area. Mallards may be common, but a lot of interesting things that have led to their coloration. They are worth admiration, not the least of which for their speculums. After all, our ancestors found them personable and showy enough to be worth domesticating, which is why almost all our farm ducks are descended from the common, but not plain, Mallard. 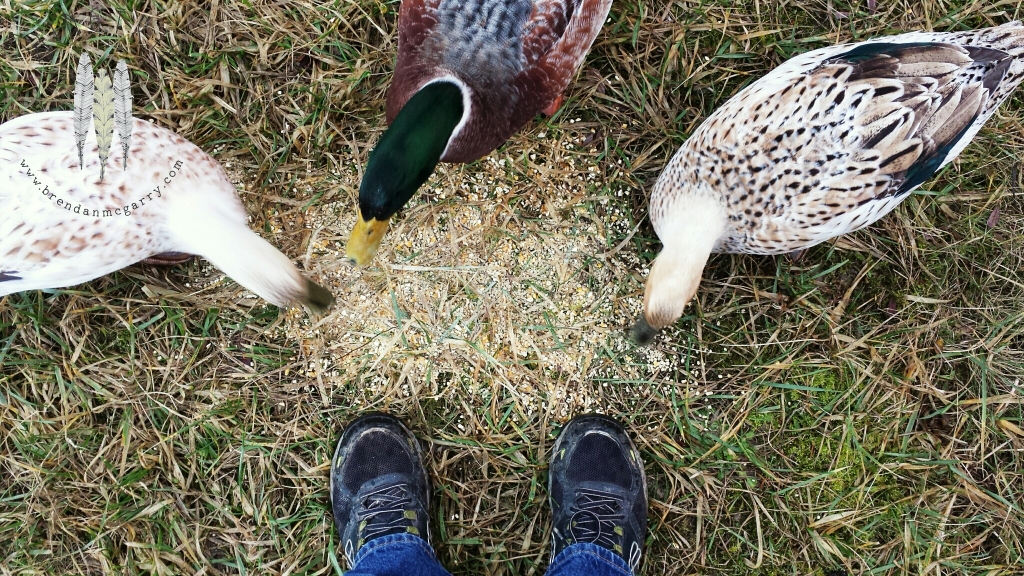 The “Harlequin” variety of domestic mallard on a friend’s property on Shaw Island.