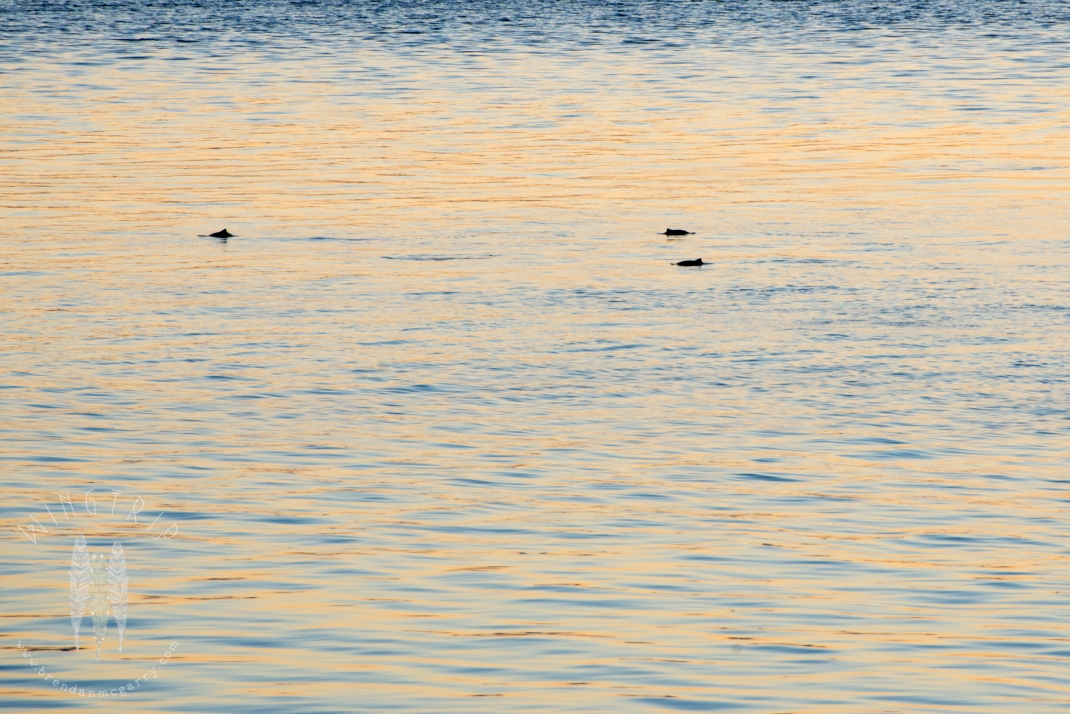 There was a quiet moment during my summer when I realized why I’d been a kayak guide for the season. I’d been equal parts frustrated, at not being able to write, read, or take photos effectively, and excited to meet a new group of fantastic people, explore a place I love from a new perspective, and learn new outdoor skills. All I’d really been after was quiet moments to contemplate seasonal changes.

In this brief space, the sun was inching into vacillating orange clouds and I couldn’t hear anything but the gentle blow of Harbor Porpoises. No engines running, no small talk from clients, just a peaceful float on a glassy stretch of the Haro Strait. Marbled Murrelets spoke up here and there, querulous youngsters harassing their parents for food, but they were an addition to the notion that I had made a good choice, at least in that moment. Sunset Over the Gulf Islands across Boundary Pass from Stewart Island.

When my role as a guide began in late May I didn’t know exactly how I’d feel about it. In being a naturalist there are only a few directions one can find for financial gain and I needed one to supplement my budding writing and photography career in the short term. So, knowing I had the chops to guide and an with the intent to disperse natural history information, I signed on.

For those of you who have worked seasonal jobs, you know the pains of finding yourself at loose ends several months later. However, you also know the variety offered, both in people and place. Life of course is all about check and balances. The problem with all encompassing seasonal work is that you don’t get any balance, which isn’t what I moved to the San Juans to find. By the end of the season you end up resenting a lot of people who have done nothing to slight you, except paying money to go out kayaking with you. Yes, I’m over kayak guiding at this moment. Looking South to Sentinel Island and across Spieden Channel to Henry Island in the Distance.

But back to that moment on the water. There were others too. Seconds, minutes, hours, where I felt like I was growing from this. Maybe not in the way a person grows their portfolio as I wished to be doing, nor building one’s resume in the modern sense, but I am fairly certain I attained something even better.

Being a naturalist is fundamentally about seeing the world around you and finding moments of focus, stories being told to you, in a whirl of confusion and constant stimulus. This gets harder when you are being pestered by people who aren’t comfortable in their boats and the pressing anxiety of potential dangers on the water. Yet, still, what I came away with, even more so than a deep seeded desire to not be on the water with anyone but friends for a very long time, was a wealth of experienced natural history. 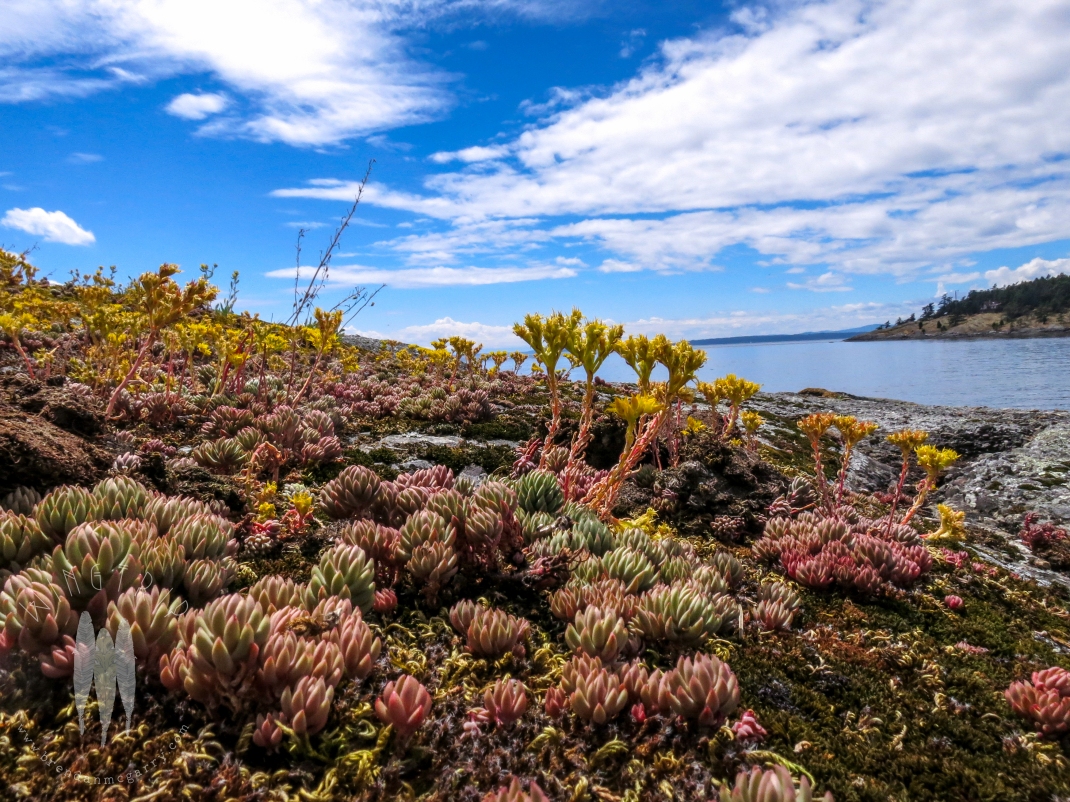 I bring this all up because as much as we think buying a field guide or having a smart phone will help us come up to snuff on natural history, they won’t get you all the way there. Being a terrestrial biologist, with only a briefest of knowledge on anything but seabirds, I found myself pushed out of my comfort zone. I didn’t know everything like I did when talking about birds or plants (OK, yes, I never knew all anyway). And for the most part I didn’t have that field guide in hand to totally explain all I saw. Basically I was getting a reeducation in observation, which is a skill birders take for granted after years of constant maintenance. After-all switching these genres of focus means developing a whole new vocabulary, maybe even learning a practically new language. 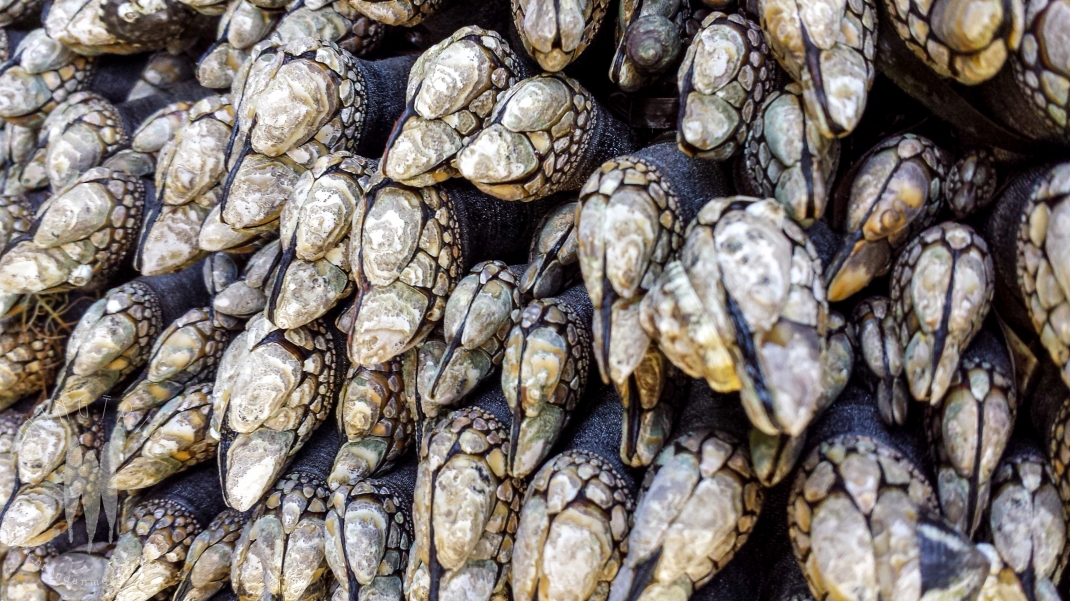 Plus, I was getting to view the world from a standstill. At least that’s how I imagined myself set down, day to day, while birds came and went, kelp beds grew and decayed, whales rode ebb and flood in trail of salmon, and tidal colors flourished and diminished. I saw days old harbor seals touching noses with their mothers and weaned youngsters naïve and curious. I watched a harbor porpoise meet an end in the mouth of a transient killer whale. And as the songs of neotropical songbirds reach penultimate crescendo, I found myself surrounded seabirds fresh from breeding near and far, ducking back down in surprise at finding my boat so close to where they surfaced. Heermann’s Gulls (Larus heermanni) on Stewart Island. These birds almost all breed on an island off the Baja Peninsula but migrate here in summer and fall before heading South again. They’re spectacular gulls and appreciate kelp beds for food and roosting. 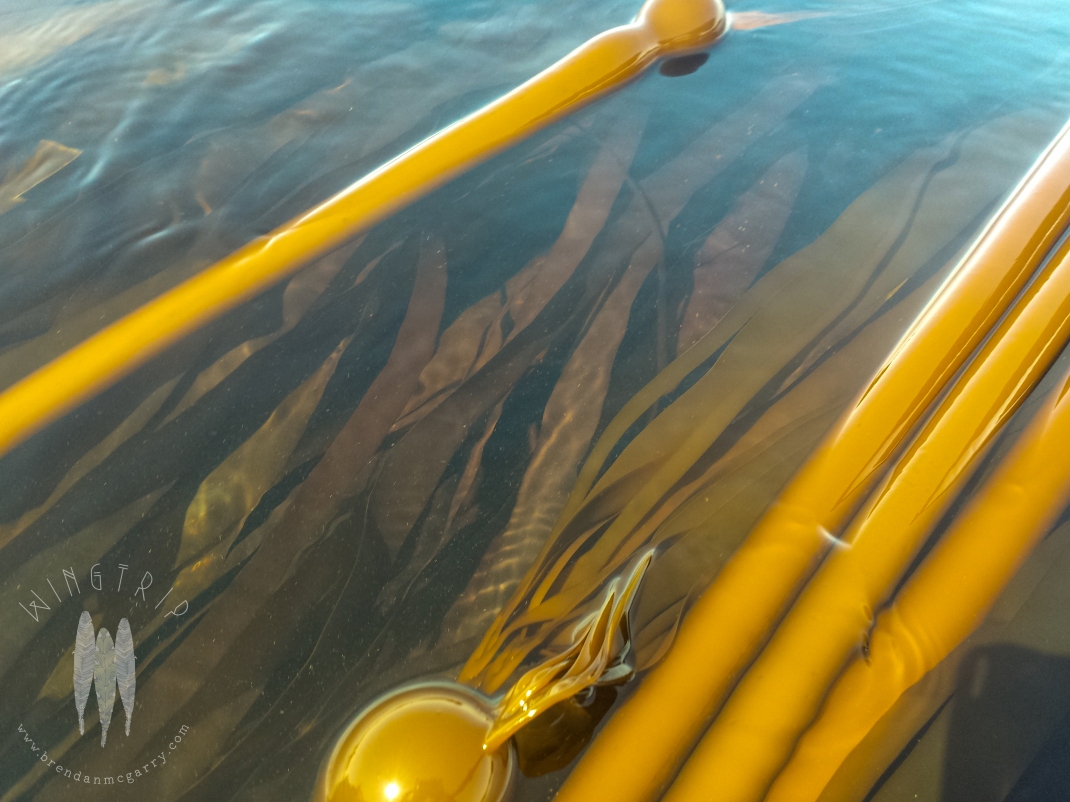 Hard questions about what I was doing still came to me.

Was I making a difference by interpreting these natural phenomena to outsiders? I wanted to think I did but I also find my respect for people can soar and plummet in a day and that en mass, humans in general don’t do much to ingratiate themselves. Was I simply doing something selfish, to gain me money and experience? 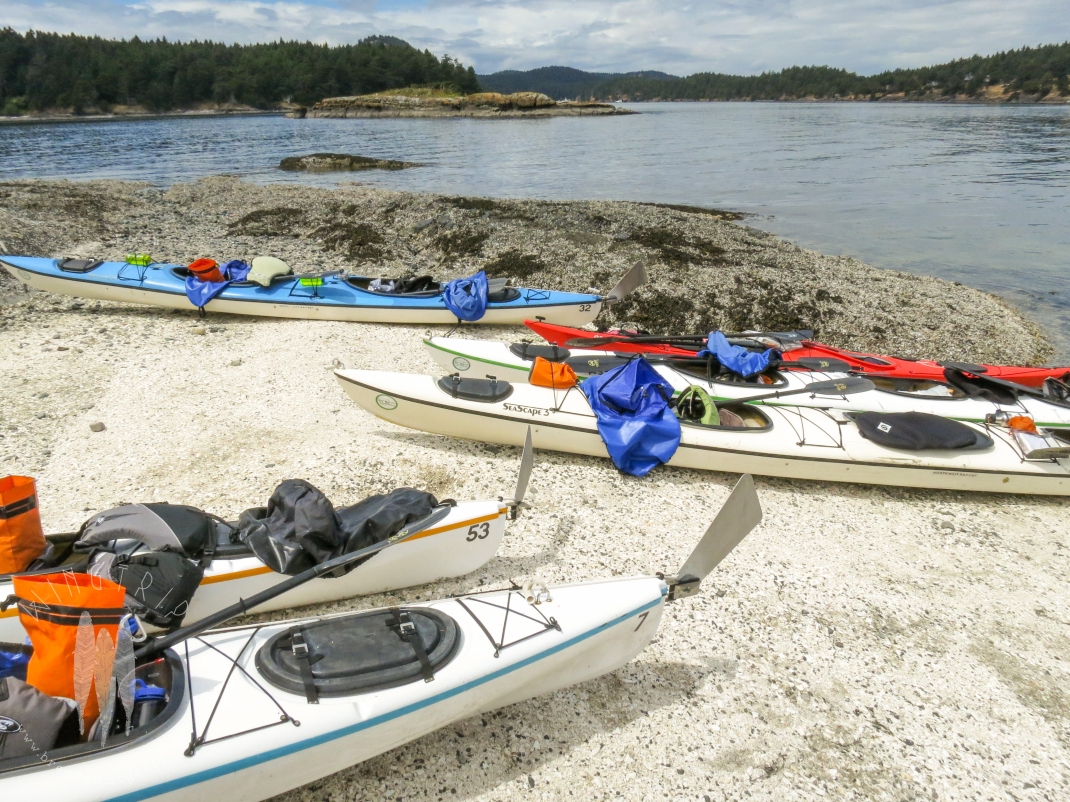 A rest break on Gossip Island, with Stewart in the background.

While it was wonderful to follow the phenology of the islands, fathom the currents, and begin to grasp skill as a kayaker I always have this inkling that maybe none of us should be out there. This of course isn’t possible, but when think of kayakers crowding harbor seals resting on a shoreline or a flotilla of boats constantly tailing whales I get queasy. The answer of course is that without this kind of attention (and these boats do contribute to further understanding of orcas, in particular), there’d be less support for these ecosystems and they’d likely plummet even further into degradation. I don’t like the notion that we live in a world where animals on the fringe of the human edifice cannot exist without of persistent management or that ecotourism is the answer to conservation. I refuse to believe that we can’t figure out that places are important and valuable with or without us. Maybe I’m being idealistic. 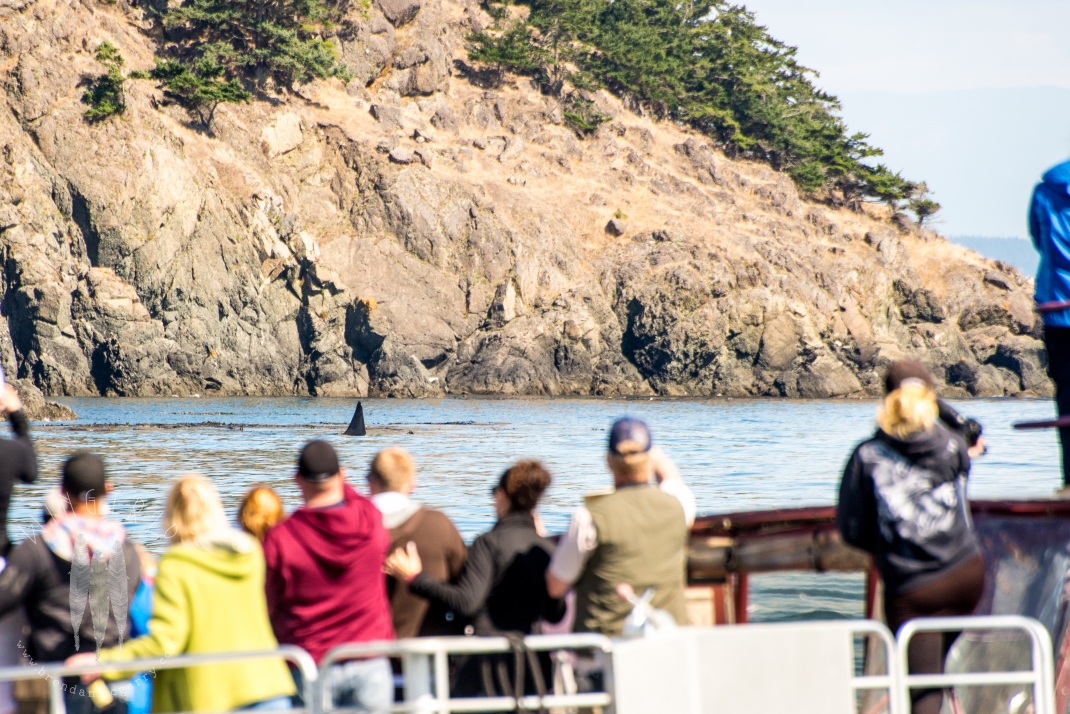 Before this train of thought wanders too far or gets too dark, I want to go back to those moments I had on the water. What I really was experiencing was wonder and in wonder I believe is a form of salvation. Ultimately, I seek to come away from any experience in the natural world with more questions that answers. Possibly I forget these questions, never find answers to them, but I form them because I look at something and see value, in the knowledge of it and it’s place on the planet. When you start to realize these things, you start to understand that you should enjoy those precious moments far more than those moments of dark misanthropic thoughts. People suck, get over it.

There’s a lot of self in being a naturalist, whether we like it or not and while I try to stay free of ego, ignoring it as a part of the story isn’t realistic. We relate to the world around us through our selves. So, while shelving a personal library of anecdotes about birds, plants, geology, water, and all else San Juans this summer, I didn’t get a lot of work done writing nor maintenancing my professional image (I’ve always been one of raise a finger to professionalism for the sake of professionalism anyway). At times I felt like a bit of an intellectual refugee because I wasn’t getting to express myself in my traditional means of communication and I started to question my reality, my goals, and my entire life. I still am, but I am grateful to have sat in the water and felt the world move around me. The hardest thing to get down isn’t craft nor speech, it’s appreciating those moments a part from life’s too big a questions.