“Probably because it’s so empty, with nothing on it” Hoshino said, pointing. “You wouldn’t feel so calm if there was a 7-eleven over there, or a Seiyu department store, would you? Or a pchinko place over there, or a Yoshikawa pawn shop? But as far as the eye can see there’s nothing – which is pretty darn nice.”

Haruki Murakami, “Kafka on the Shore”

The rain started sometime during the night, making me thankful I decided to put a tarp over my hammock. It wasn’t a heavy, stormy rain, but a rain of sea fog, the kind squeezed from air and dripped from the trees ceaselessly. The kind that would have soaked my sleeping bag just slowly enough to not notice, until I was shivering at 4a.m (you might guess this has happened before).

Kalaloch campground is a place of personal mysticism. At face value it’s simply a campground, not very interesting, up against highway 101 and short, sand cliffs on the ocean. I would probably never think twice about it, having seen hundreds like it with the same spartan, damp bathrooms, meticulous lists of rules, and the same people who sprawl about the best spot in their fantasy trailer park of beer cans, ropes, tarps, barking dogs and sniveling children. Forgetting that, Kalaloch is where I was struck by my lifelong passion for birds.

The story itself is a little too perfect, verbose in my telling, and I’ll save it for elsewhere. Secretly I’d hoped we’d stay the night in the same camping stall where I came face to face with a Pileated Woodpecker. The Sitka Spruce seemed taller than before, which I realized was possible, considering it was twenty years since that summer vacation. I was a bit crestfallen when the approximate space was filled by a large camper van, so I decided to not delve too deeply into memories. Besides, this wasn’t meant to be a time to reminisce but to go birding. Forgoing breakfast for later, we rose at daybreak, hastily packed up, and headed North.

Ruby Beach might not be the best vantage for seabirding, but it is definitely a beautiful place to explore. We arrived to the quiet section of fine sand and immaculately rounded stones, appreciating the stillness of the morning mirrored in the freshwater lagoon. The sea stacks, broken off hunks of land carved from the mainland by time and waves, wore skirts of fog.

Someone was camping down between the drift logs, which was a surprise because the parking lot was empty (and it’s not strictly, allowed). We settled not too far from the tent, finding a suitable log to sit on. Adam, much more businesslike than myself, got right down to scoping for birds. I fired up my stove and got water boiling for coffee.

Breakfasting on bread and cheese, coffee in hand, I got around to earnest seawatching. The gray fog lingered, imperceptibly receding, revealing reefs and breaking waves. The shearwaters were out there, still streaming by. I thought about how many days out of the year they spent coursing back and forth against the West coast of North America and fantasized about being able to observe the entire year of their activity off Washington. Having the patience and luxury to spend that time would certainly provide personal insight at the very least.

A pair of Peregrine Falcons flew by, no doubt living a successful life of eating seabirds. The slender male first, the bulky female second, they casually winged down the broken coastline. Their presence, despite the fact they are among the most common raptors in Seattle, finally gave me that warm feeling of being in a place not actively augmented for people. We’ve visited, but we’ve never stayed and the rich profusion of life told that story.

Scoters, gulls, grebes, and alcids dotted the ocean in front of us. A Sea Otter lazed about on its back. Black Oystercatchers blended perfectly with the rocks until their red bills rotated into view.

I am always quite focused on vertebrate life, but I knew that the foundation for all these creatures I observed was atop thousands of complex interactions between things we couldn’t see with the naked eye. You could easily feel insignificant in the face of this web of life and you should. You should think about all that you don’t know more than what you do. Could I name the crustaceans beneath rocks I overturned with careless feet? No. Did I care that they were there, when I noticed them? Yes. The naturalist’s compulsion to name is generally a good one, but it shouldn’t distract from an appreciation of form and function regardless of which dead white guy its named for.

Before I noticed the people in the tent rising, I knew they were contemporary hippies. From Alaska they told me, headed to San Francisco, whichever way life took them. The old folks who creaked down the path to stare at the sea gave them wide berth, as did Adam, but I wanted to know their story. I’ve always considered myself an introvert and shy, but I’m never troubled by a friendly conversation with strangers. Adam and I both seemed to enjoy this because we gravitated towards the interaction. Some people find a random approach off putting and you can always tell when they do. What’s more off putting is standing in proximity to other people, in the presence of a wonderful place, and not acknowledging them with a simple smile or joyful comment.

Ready to move on, two things thrust me back into modern human existence. The first was a training, for what appeared to be negotiators (like those who speak with the hostage holders), running an extremely noisy generator in the midst of their huge vehicles (they all also happened to be huge people), in the middle of the parking lot. The other was that when I rolled down my window to say goodbye to the hitchhiking hippies, regretful that I couldn’t offer a ride, the winder motor failed and my window no longer rolled up. Were these signs we shouldn’t head back? Maybe I could let Adam hitch back with the hippies and I could just stay there and eat starfish and kelp and live in a wave carved cave.

We made a couple more stops, talked to a couple more people, and saw many more birds. Destruction Island was a beacon for birdlife and a high vantage along 101 gave views of more seabirds. Several Black-legged Kittiwakes (the best gull name ever) flew by, distant but diagnostic. More Sea Otters were out in the rocks surrounding the island and a section of sandy beach was piled with lounging Harbor Seals. I remembered Roger Tory Peterson’s telling of his experiences on Destruction Island during his “Wild America,” jealous and grateful for his words at the same time.

The final conversation we had while scanning the rocks at one of the numbered viewpoints (what an absurd way to distinguish such beautiful places), was with a couple from Minnesota. New to the birds here, they were curious about what we could see, and as it turned out they too were birders (in a casual sense). We had a pleasant conversation, discovering we had mutual acquaintances and that we all loved ravens (they fed them at their home). Parting, wishing them luck and advice in their travels, they told me they’d look for my books in the future. My response was to blush and mumble a thanks. The random kindness of strangers in America is often startling.

One final stop was at the “Big Cedar Tree;” a signed attraction. Like any of my travel companions, I subjected Adam to photography hi-jinks, climbing about the twisted tree for a few shots. Cedars this large smell as much of decay as they do of their fragrant oils, and this mangled behemoth was carved by plaguing rot, but still seemed elegant and powerful standing against time. It seemed familiar, so familiar that when I got home I looked through some old photos and discovered an out of focus photograph of my dad, my childhood friend Mathew, and I standing at the base of this same tree twenty years ago. Nothing seemed to have changed, and likely not much will for another twenty. I’ll make sure to come back and check. 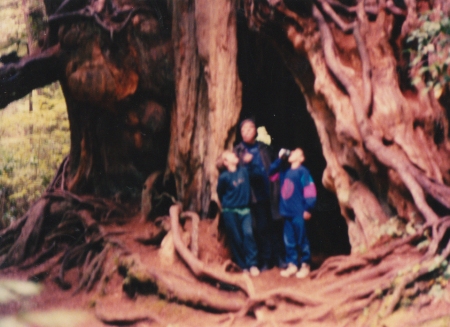