The notebook has been stashed in a beat up cardboard box, one that I’ve hauled from home to home, for years now. It has mingled with my old journals and notebooks, saved over years of scribbling and jotting. Someday I’ll look through them all. Or maybe I won’t and will be mortally embarrassed when, haunting my ancestors, they read my sprawling “prose” and salient thoughts. However, this specific notebook about isn’t mine. I don’t know who it belonged to.

I keep a journal, I keep notebooks. They’re full of complaints over my life’s limited travails, but I keep them up under the guise of discussing nature as it relates to my life and explorations. There’s also quite a lot of lists in there, mostly lists of birds.

The notebook’s unknown author scribbled dozens of lists, mostly about birds. This collection of lists came into my life when I worked at a certain Seattle non-profit that focuses on birds and nature. A brother and sister came into our storefront, holding a little stack of old notebooks. They told me their uncle had written in them, and that they were mostly about birds. They thought maybe we could do something with them. Not wanting to dismiss their uncle’s legacy, I said I’d see what I could do and took the stack to my office. Before I could ask more, they turned tail and rushed out the door. I got the distinct impression they felt they’d just offloaded evidence of their uncle’s terrible kink, instead of helping birds, by donating the notebooks.

As it turns out, there’s really not much to do with a bunch of scribbled notes, no matter how much I’ve come to covet them. They sat in a pile by my desk for months. Finally, while cleaning up my space and discarding most of my collected detritus, I came to the worn little notebook and I just couldn’t bring myself to toss it out. I kept it.

Me, writing in my journal. I also happen to looking out over a beautiful landscape of shrub steppe in Central Oregon.

Why do we journal? Certainly it’s a form of documentation. In my travels to various parts of the world I’ve kept journals. My ornithology professor at the Evergreen State College, Steven G. Herman, taught almost all his students to keep a Grinnell Journal. This system of journaling, created by the famed first director of the Berkeley Museum of Vertebrate Zoology, Jospeh Grinnell, aimed at documentation for naturalists. Steve, who is the best teacher I have ever had, made sure we kept our Grinnell journals up to date during my first class with him,Spring Ornithology. Diligently, we recorded daily activities, accounts of behavior of various species as our class traveled across Washington and Oregon. If I were more focused, I would have kept this up in the years since graduating, but I’ve only managed a few measly months of record keeping in the lapsed time, (I will note that I never got my journal back after the quarter ended due to some mix-ups, which may have influenced my enduring excitement).

Steve in his wall tent (in the same location in Central Oregon) where I am writing in the photo above, catching up on his Grinnell Journal.

Either way, keeping strict record of data has never been my forte. This is evidenced by the fact I don’t actually know how many birds I’ve seen in the world, the greatest of cardinal sins among serious birders. Atop my current unattainable stack of goals for the coming years is to re-initiate my Grinnell Journal (because, shit, I feel like everything is going away and I want to record it) and figuring out how many birds I’ve seen (which is immensely challenging when all the dipshits who study taxonomy keep changing things on me). Recently I managed to count up to 605 birds I’ve seen in the American Birding Association Area (for non-nerds, basically North America minus Mexico), but that’s a fraction of what I assume is around 2000.

But back to journaling, I also think doing so serves deeper purposes. For me journals are one part rough draft for longer writings, one part posterity on a life well and poorly lived, and one part complete and utter catharsis (a well known form of therapy). I am rarely thorough, despite my best efforts, because I am easily distracted and get lazy. On trips I leave with an earnest goal to write in every spare moment and take copious notes; a couple days in I re-neg. The first time I read Travels with Charley, I remember feeling justified in this habit. Steinbeck relates how much effort he put into bringing along reams of paper and a typewriter on his trip, only to never touch them. And yet, if I could go back and get my young self to journal, just like everyone said I should, well, I would. As a child you think you will remember everything but years later you realize you recall only that you thought you’d remember.

In working on this piece I pulled out old notebooks and found details from trips I’d forgotten going on and notes from a trip to Ecuador I assumed were long lost.

We’ve learned great things about history from journals, which is a good reason to keep them. We can’t assume our ideas or experiences are worthless. I don’t suggest that I write because I hope someone will one day discover my journals and find them captivating and somehow illuminating on the human condition of my day (but of course, I do). I write because I like to and journals give me a place to get out the jitters in preparation for more refined writing; a place to think.

If all goes well, I try to write a page a day and leave the facing page blank to jot unrelated notes and doodle (an adapted holdover from Grinnell journaling, where one page is left empty). I try to write about the weather, what natural history events I witness, and about personal things. If I am traveling this takes on the form of basic documentation. If I am on an endless streak of time in the city, I wander and wonder a bit more. I like writing in the morning because my brain is less stuffed with the day’s happenings, but more often than not, it’s the last thing I do on a daily basis.

Journaling in Hidden Lake Lookout in the North Cascades.

What about this notebook I stumbled upon? It doesn’t have a name in it anywhere (I realized few of mine do either and I just now put a label in every one), but it’s fairly meticulous. Every page has a date and a location, just as mine do. For the most part it then follows a typical theme: a list of the species. There’s rarely any notes about the birds, just that they were seen. Yet somehow I was drawn into looking at this little plastic bound dedication to birding from decades before I was born.

Uncle Dan, let’s just call him that, wasn’t a particularly rabid birder, but he kept decent notes. He doesn’t include numbers but until the era of eBird, I rarely kept track of individuals except in unusual cases. However, I know where he went between May 10, 1951 and June 15, 1960, which was mostly birding in South Dakota, Washington, Alaska, and Arizona. Uncle Dan visited places I’m quite familiar with, if he provided a little more detail, it would feel like looking back into the past, (it already does, because many of the bird names from that era are different from today’s). He also appears to have funded his travels by painting houses, which is not all too dissimilar from how I’ve managed to get to far flung places. 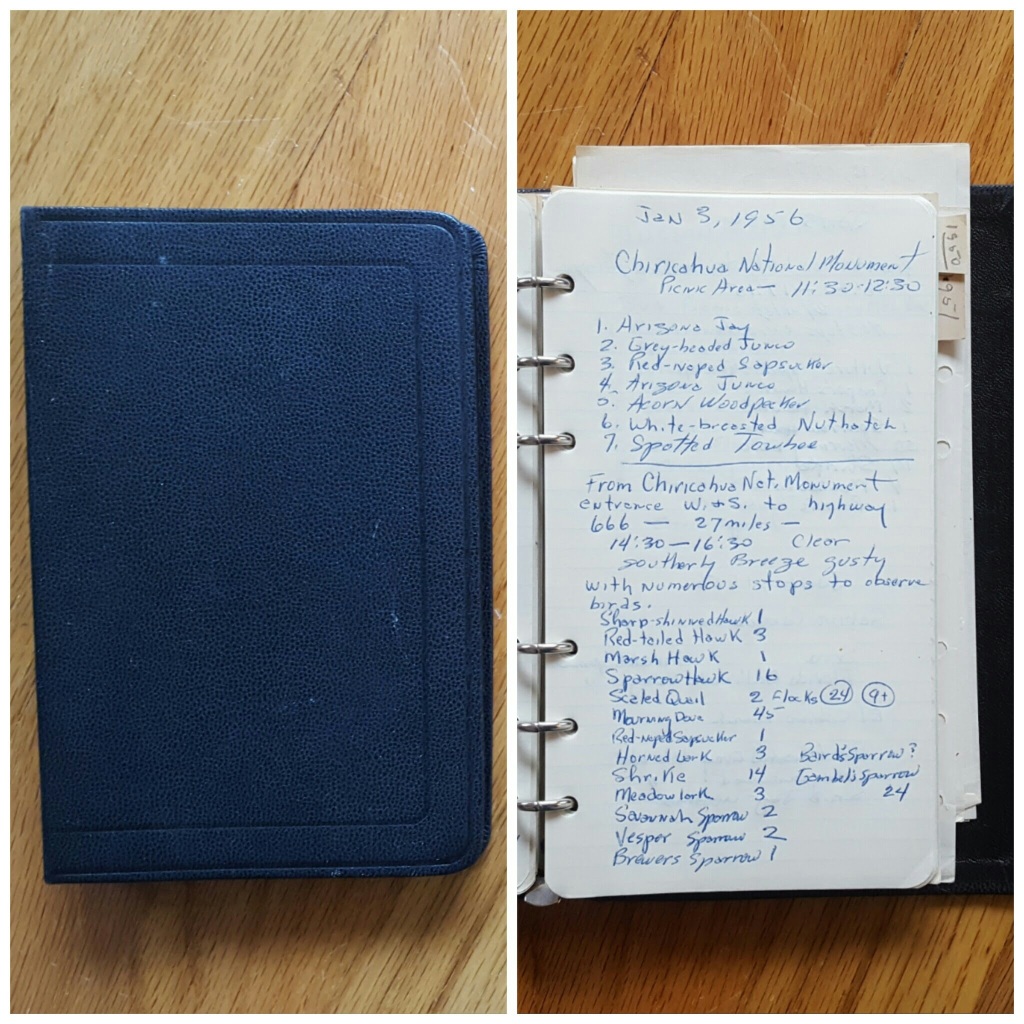 The notebook. Pretty much every page looks like this.

These notes don’t really matter to anyone anymore, which is fine. I think I’ve been holding onto them because I want to honor someone like me, who records his life with only a desire to look back someday. I highly doubt anyone will read my journals, unless I meet an untimely death or I somehow have offspring. That’s something I can deal with. But maybe, someday, someone will find one of them and hold onto it, just so they can feel like their writing will be appreciated in the future. I like that idea.

Today I opened my journal and didn’t have much to say. But I wrote about the weather and what’s been going on in my life. There were no revelations, no great records of events, just some every day thoughts. If I’m lucky I’ll keep at it and when I’m done, I’ll have stacks upon stacks of journals, just because.

A sampling of the journals and notebooks I’ve filled in recent years. Here’s to many more!